You won't be seeing three of these places for long, I'm rather certain. Catch 'em while you can!

What you'll see below is a rather dense amalgam of post offices, each of which has historically served the Plainfield area for decades. There's a reason these locations exist to begin with. So what some might see as postal excess could also be viewed as providing astounding service to the residents of the Plainfield area -- something all organizations strive to provide its customers with in the best of times, and an aim the Postal Business Service should be striving for to maintain its customers in densely populated areas during these lean days.

So once we get a geographic fix, let's look at each of the post offices in the area and see if we can figure out why they're here and who they serve. I'll provide a first-hand account of my early-Friday afternoon visit to each of these locations. Afterwards we'll play a game I like to call "Guess which of these places actually served the most people while I was there!" The results will be enlightening, I'm sure. 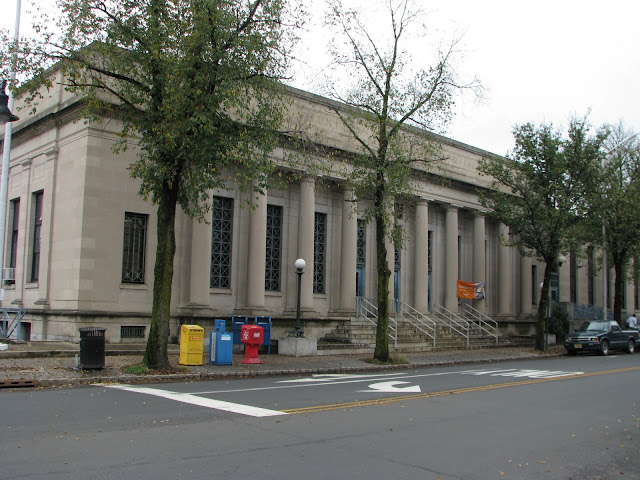 So when was this built? EBay features a postcard showing the "New" Plainfield Post Office, an item which dates back to World War I. It was mailed from Plainfield in late 1916, so it's reasonable to deduce that the building was constructed in 1915-6. The card, below:

The building still has old-style P.O. boxes (with the see-through windows) and features two murals, which one can be rather certain date to the Depression. The murals occupy either side of the main lobby, and one spans the entire wall above its PO Boxes. [Note: While I would love to share with you this glorious artwork, I request permission to take photographs of murals on the grounds that they are for my personal collection. USPS lawyers can actually get rather prickly about publishing them on copyright grounds. I do tempt fate an awful lot, but...]

On the commercially dense surrounding streets, all parking is metered. The post office maintains no customer parking lot. This is a reason that many of the area's poorer residents would prefer not to travel to this location, even if it's only a mile from their homes.

The Postmaster operates out of this Plainfield Main Post Office, and is responsible for all five other branches and stations detailed below (as well as its Warren Branch, which I haven't yet visited). 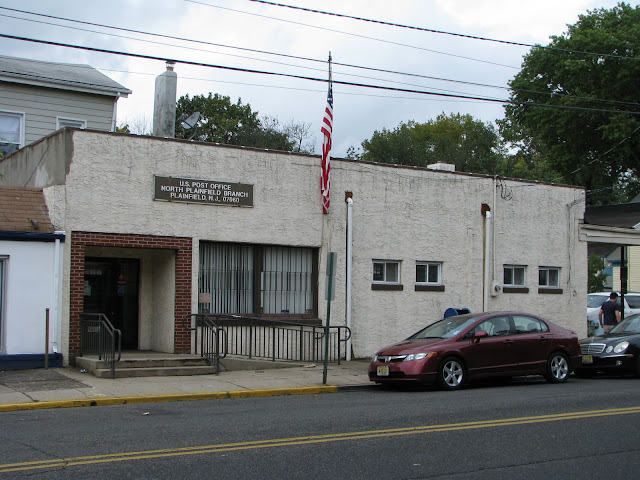 I'd say this will most certainly be closed due to proximity to the Plainfield MPO [see map above.] A fine reason to be sure, but there are counterarguments all the same.

The borough of North Plainfield is concerned about losing its identity with the closure of its postal branch. Hence this message regarding USPS's already-held North Plainfield community meeting, on the borough's official website: "All North Plainfielders are URGED TO ATTEND! YOUR OPINION IS ESSENTIAL SO THAT THE U.S. POSTAL SERVICE CAN DETERMINE HOW IMPORTANT THIS BRANCH IS TO OUR TOWN!"

It is likely that this post office would not be on the chopping block if USPS hadn't substantially shortened its hours. Currently the office is open from 12-4; anyone seeking to conduct postal business in the morning must head over to the Plainfield Main Post Office or to neighboring towns' facilities to the west. A sign detailing the office's current hours obscures what used to be: 9:00 - 4:30. A location that's designed to fail?

It's a one-clerk operation, for the record. And when I was there a customer purchased $44 in stamps. So: all told, deduce financially what you will. 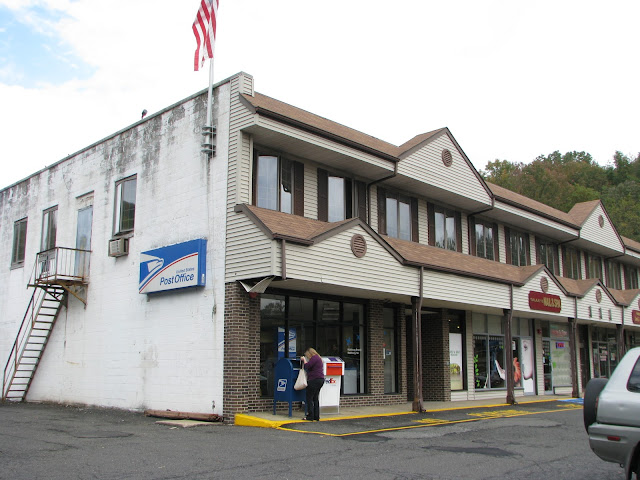 "Well, if North Plainfield residents really want to stay in the same county, can't they go to the Watchung post office?? It's only a mile away!"

Actually... Route 22 is pretty good at precluding that kind of thing -- at least if they'd prefer to walk. It's a bit bizarre:

So, what we've got in Watchung is another four-hour office, though one that seems to have escaped RAOI. USPSEverywhere shows more than five retail access points within two miles (in the form of either full-service post offices or other random locations that sell stamps, which you're somehow expected to know about), so I'm guessing it's safe because it somehow rakes in over $600,000 a year despite its limited hours. 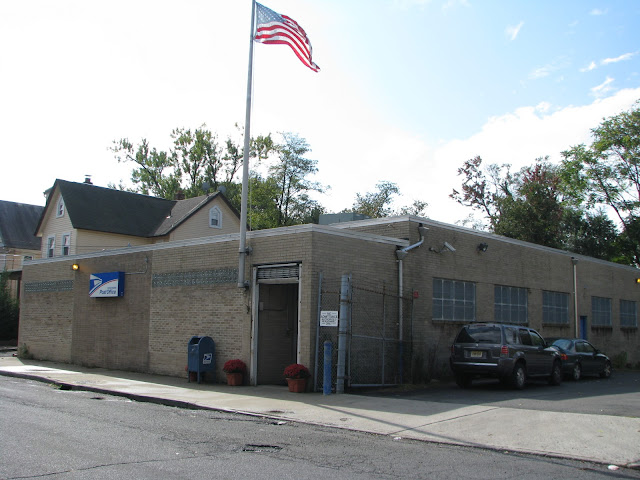 An office on a residential street, in a generally poor area, that was being HIGHLY used by locals when I was there. During the 12-or-so minutes I was there, SIX postal transactions occurred, not including my own.

I briefly interviewed one limited-mobility resident -- who requires a cane to walk and who does so very slowly -- as she was leaving the post office (and yes, I held the door open for her!); she says that closure of the Muhlenberg Station would be a hardship for her because she lives right down the block. She can't drive. So even at a mere mile away, the Plainfield MPO is a prohibitive trek. 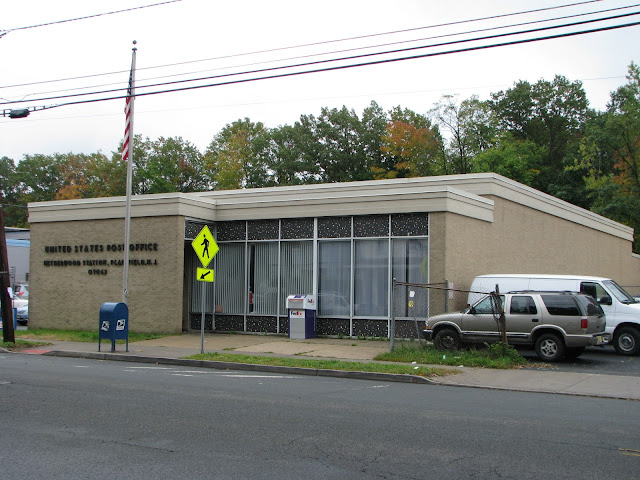 Plainfield's stations and branches serve the residents who live outside the city's center -- generally one in each direction. You've got North Plainfield and Watchung to the (gee) north[west]; Muhlenberg to the south[east]; Station A (to be discussed) to the [south]west; and Netherwood to the [north]east. Plainfield has 50,000 residents -- not including North Plainfield and Watchung -- a healthy business district (served by the MPO), and residents in all directions. So it's really not all that unreasonable to be providing service all around.

Netherwood, another 10-4 office, is one more that doesn't seem to make USPS's new revenue cut -- which, once again, amounts to $600,000 a year in the urban instance. Which isn't to say it's unused; I'll reveal the customer number later. 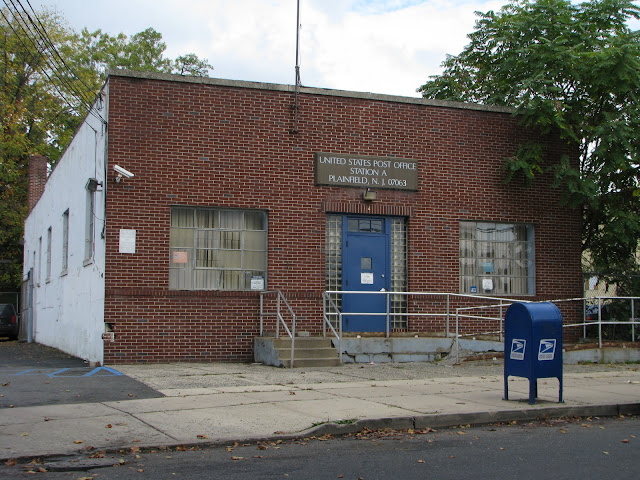 The customer in front of me complimented the clerk of this Clinton Ave. post office for her polite manner. I asked her if that's a common occurrence, to which she replied that she enjoys serving her customers well. A good attitude to have, wouldn't you say? I hope that USPS's RAOI-instituting Upper-Upper Management takes that to heart.

The Grand Finale: How many customers were served by each post office during the author's time there [waiting in line, chatting, taking a photo outside]? Counts include customers served before me and/or after me, and do not include those picking up their PO Box mail. It's all to the best of my memory, of course.