[I write this blog because I like the Postal Service and recognize the importance of brick-and-mortar post offices to communities across America. One hopes that is taken as a compliment. It is my view that the mass discontinuance of post offices and RAOI do more to damage the long-term viability and integrity of USPS than to save it.]

It is USPS's duty, by birthright, to properly serve every community in America. All of them; not just 'profitable' communities. The below offices are being STUDIED for closure, but the fact that these communities have to so much as go through the formal process of defending their right to their offices is, in my view, insulting. It is possible that RAOI, by sole virtue of its revenue thresholds, can tend to focus not only on small rural communities but also on poor urban communities (which often need their full-service facilities the most).


An ugly side effect of USPS's Headquarters-mandated Retail Access Optimization Initiative (RAOI) is that it's not just rural communities that must fight for their post offices' survival; a disproportionate number of poor urban communities must do so as well. It's surely not intentional, but I do think it can place undue burdens on many of these communities.

As part of the 3,650 post offices being studied as part of the minimal-money-saving initiative [0.3% of its annual operating budget], the following are being studied:
"384 stations and branches that earned fiscal year 2010 (FY) revenue of less than $600,000, that had FY 2010 revenue less than the average for FYs 2008 and 2009, and that are located within two miles of at least five postal retail and/or alternate access sites."

(Alternate Access primarily designates a store, like a Walgreen's or a bank, that will sell you a book of Bell stamps. That's it. Alternate Access locations are not post offices, and should not be thought of as a sufficient replacement there-for. Sometimes these locations are CPUs, which actually provide most services. That's a bit of a different story. VPOs do not.)

Once again, USPS subtitles the study Expanded Access -- but I read that more as code for "Many Fewer Post Offices".

All else equal, RAOI's revenue considerations mean that post offices in poorer communities are 'targeted'. Which is a real shame, because a post office in a poor community is quite often just as well used, if not moreso, than those in those more affluent areas. But there's a subtle difference amongst many of their customers' respective purchases, which I state after having observed countless postal retail transactions: Most stamp sales in more affluent communities are for a full book/pane of 20 stamps -- $8.80. Many in poor communities, believe it or not, cannot afford to purchase more than one stamp at a time. In many instances they have waited more than 20 minutes to buy just one stamp, so that they can mail the letter they hold in their hands. Of course the revenue for the post office in the poorer community is going to come up short/er. I've noticed that Money Orders tend to be more prevalent at poorer community POs; package shipping is universal.

Unfortunately, each of these communities now has to go to bat for their post office at public meetings as a part of RAOI studies that are [in my view] frequently a waste of time. (In what way would it be remotely responsible to, say, discontinue more than a third -- 17/45 -- of the post offices in The Bronx?) Let's look at what's going on in Newark, NJ, which already lost its Riverfront Plaza and Washington Park Stations earlier this year.

Whereas at the beginning of 2011 there were 10 post offices serving Newark, by the end of the year it's possible that there could be just FOUR.

(The star in the upper right represents a large processing facility that's being studied for closure.)

In 2005, there were 14 classified post offices in Newark. (Thank you, PMCC Post Office Directory!) This is excluding branches, which lie outside a city's corporate limits -- like Irvington, which is a separate city. Discontinued between 2005 and 2010 were the following: [Newark/Liberty] Airport Mail Center [07114, same as South Sta.]; West Station [07103, same as Springfield Ave.]; Broad Street Sta. [07102; same as the MPO, et al]; and Clinton Hill Station [07108, no longer served by a retail P.O.]. There were two CPUs, though there is just one now, north of North Station.

If all the RAOI offices were to be closed, Newark would be left with Springfield Ave., the MPO, and Ironbound holding up the middle, with one station north, and nothing serving Newark's southern communities. When you consider that Newark, as of the 2010 Census, has 277,140 people, even floating the idea of shuttering so many facilities is, to me, irresponsible at best. Fortunately, I doubt think it's actually going to happen -- at least not in its entirety... in which case the process would be an exercise in bureaucratic futility and a stretch of USPS's already thin dollars.

USPS might say it's sufficient to have five post offices OR stamp-selling banks lie within a two-mile radius of a given Newark facility [think: within a 12.6-square-mile circle centered about that point]. I disagree: the population density for Newark [excluding airports and seaports] is 21,000 people per square mile. And honestly, not everyone has the means to travel as many as 40 blocks should they want to purchase just one stamp.

The only reason I can think of that these locations ended up on the RAOI 'Hit List' is the revenue -- which, honestly, does comes down to the fact that the residents of Newark are poor. Again, I'm not saying USPS is targeting these locations because they're poor; it's just a consequence of the RAOI provisions, which is very unfortunate. Let's take a look at the numbers:
[As of] 2003, the median income for a household in the city is $26,913, and the median income for a family is $30,781. Males have a median income of $29,748 versus $25,734 for females. The per capita income for the city is $13,009. 28.4% of the population and 25.5% of families are below the poverty line. 36.6% of those under the age of 18 and 24.1% of those 65 and older are living below the poverty line. The city's unemployment rate is 12%."

I suspect the numbers are even worse in these leaner times. Incidentally, do you think these folks can all afford the Internet access that the Postmaster General declares is putting USPS out of business?

So let's face it -- there more than a quarter of a million people in Newark, enough to be served by 8 or 10 post offices. From my experience at each of these facilities, witnessing firsthand how well-used they are, per-transaction revenue is likely the only reason that these offices could fall below beneath RAOI's thresholds. So it is unfortunate that the Postmaster General feels the need to have these people actively defend their communities' right to have a post office. (I don't believe that insulting the communities one serves, as well as telling one's own employees that you don't need them, is good business practice.)

Let's take an actual look at the locations in question: 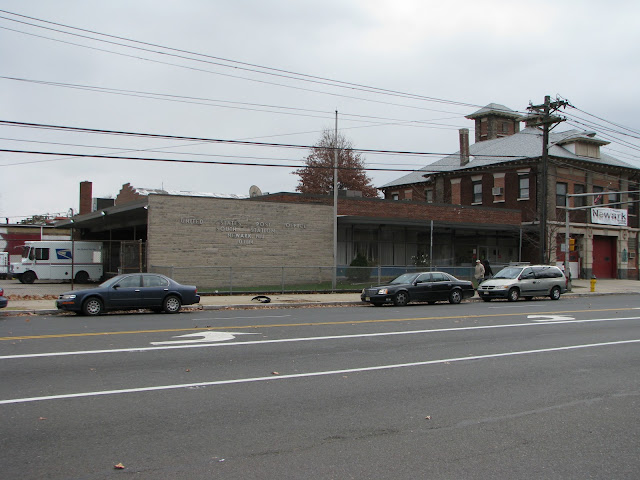 Those cars were people there for the post office. 'Nuff said. Serves: South Newark, likely parts of Clinton Hill and even South Ironbound. 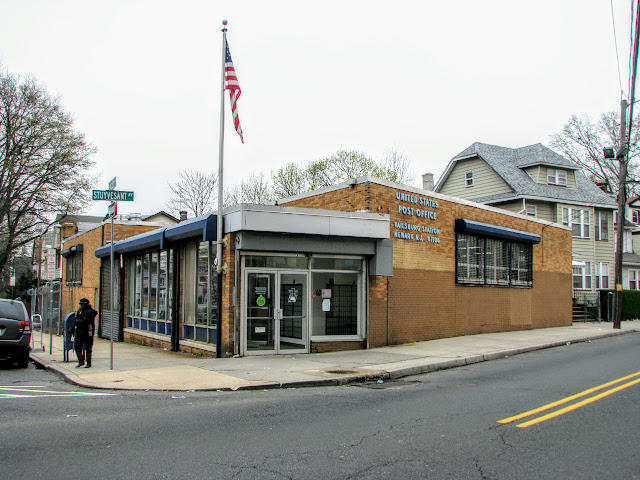 A friendly location that's currently the only one serving west Newark. I'm sure some people come from east of the Garden State Parkway to visit this location as well.

Newark, NJ: Midtown Station post office
Believe it or not, I completely forgot to take a photo of this location while I was there. Probably because I was trying to figure out how to get my car back after it was towed during my time at the Newark MPO.

I'm rather certain this one's getting a raw deal. This location just absorbed the business of the Washington Park and Riverfront Plaza locations; RAOI involves past data. Forcing everyone to head over to the MPO would be an imposition on many, especially students and workers at NJIT and Rutgers: Newark. A half-mile is a reasonable distance between offices in a downtown of this size.

But hey, look at this USPSEverywhere inset -- it looks as though there are tons of postal services available around Midtown Station that could easily substitute for a discontinued post office location:

But let me annotate this a bit to make the situation a bit more clear:

I disagree that this constitutes sufficient postal services for this community; it looks more as though USPS mapped a slew of banks. (I'm sure Wells Fargo thanks them.) But by and large, this is what is referred to by Alternative Access: contracts with some national chains that will sell you bell stamps, but not really do anything more for you. [Once again, this is a bit simplistic and ignores CPUs, which tend to be in local businesses and whose services provided DO resemble those at a classified unit; but those are less common.] These stores are not post offices, but USPS lawyers would like to have you think they are; furthermore, AA locations are treated as such in some of their calculations that help to determine whether or not to close post offices. 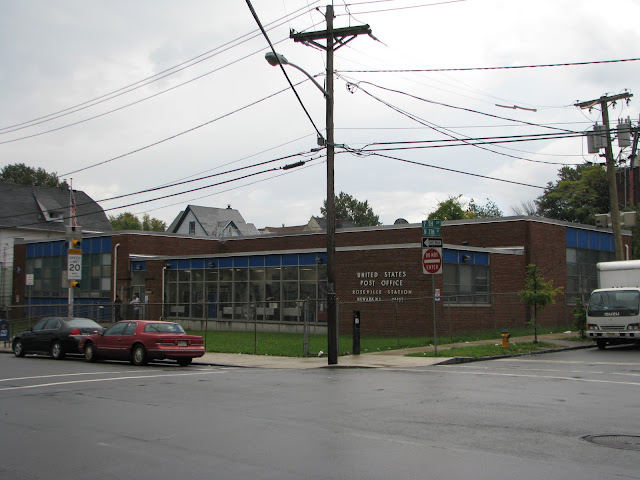 Roseville is a BIG community. This would be a devastating loss. There were no fewer than seven people either filling out forms or conducting transactions during the five minutes I was in the office (plus others picking up their box mail), so the study of this facility seems like a charade.

Looking at the USPSEverywhere around Roseville [the blue marker being the post office in jeopardy], a community that is not blessed with national chains:

You have one guess to figure out what the red marker is in the upper right. (Hint: It's a Wells Fargo.)
Posted by Evan K. at 1:37 AM